Captured on video in June 2015, this amateur footage shows a lightning bolt hitting a Telecommunications tower directly! The awesome power that thunderstorms contain is on full display, and the speed and violence of a lightning strike are evident. It is easy to understand why lightning can be such a dangerous and damaging event when a strike is captured from this distance and with this much detail.

Up to 200,000 Amps and over 1 Megavolt of potential are contained within each lightning bolt. This is enough energy to melt, damage, or catch fire to anything in its path. In this case, the path is a Cell Phone tower…packed with expensive Electronics & Antennas. While towers (as with any outdoor radio antenna installation) are usually well-grounded and take most of the lightning energy to ground (earth) directly…A portion of the energy will directly or indirectly (induced charge) enter the coaxial RF cables and transmission path during the lightning strike event. This lightning energy can wreak havoc and cause terminal damage to radios, antennas, cables, and anything else in the vicinity as it travels through this equipment in search of a path to ground. 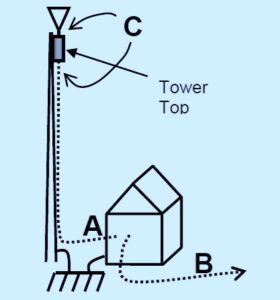 Luckily, there is a way to remove fear of lightning damage to any coaxial cable run or radio & antenna installation. Installation of coaxial lightning & surge protection at appropriate points throughout the system, especially high-quality surge protection designs such as those offered by NexTek, can eliminate concerns about lightning & surge damage. When arrestors are properly installed and grounded, the risk of damage is virtually eliminated.

Of course, the potential danger associated with lightning also extends to people! Be sure to follow Lightning Safety Guidelines…primarily, head indoors as soon as you hear thunder! We are glad that this lucky amateur videographer was OK after shooting this video, but DO NOT recommend trying it again!